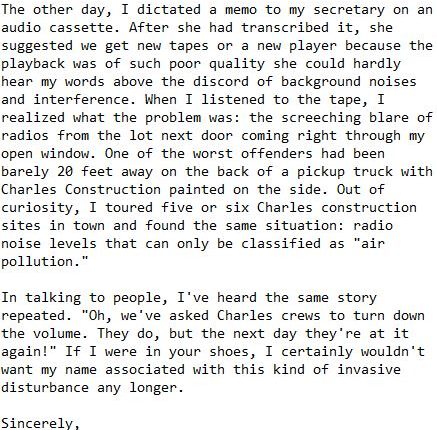 Below is sample complaint letter about noisy construction crew :

The other day, I dictated a memo to my secretary on an audio cassette. After she had transcribed it, she suggested we get new tapes or a new player because the playback was of such poor quality she could hardly hear my words above the discord of background noises and interference. When I listened to the tape, I realized what the problem was: the screeching blare of radios from the lot next door coming right through my open window. One of the worst offenders had been barely 20 feet away on the back of a pickup truck with Charles Construction painted on the side. Out of curiosity, I toured five or six Charles construction sites in town and found the same situation: radio noise levels that can only be classified as “air pollution.”

In talking to people, I’ve heard the same story repeated. “Oh, we’ve asked Charles crews to turn down the volume. They do, but the next day they’re at it again!” If I were in your shoes, I certainly wouldn’t want my name associated with this kind of invasive disturbance any longer.